A cruise is defined as a sail about in an area without a place of destination, especially for pleasure; or a voyage on a ship or boat for pleasure or as a vacation, and usually calling at several places. One can go back a hundred years or more of “cruising”; however, the definitive word in the definition of a cruise is “pleasure”.

The Queen Mary plied the Atlantic from Europe to New York, and was eloquent in her day. She is now docked in California.

Talk of historic cruise ships usually brings up thoughts of the famous ocean liners such as the Titanic, the Queen Mary, the RMS Queen Elizabeth, the Olympic, and more. Many of these ships were not cruise ships as we think of them today. The majority of their passengers were sailing on these ships as a means to an end, in first class or much less grand accommodations, traveling from one part of the world to another one way, similar to plane travel today. The “cruise” was the method of travel – sometimes the only method of travel – not the sole purpose of the voyage. A “cruise” back then was rarely for pleasure alone.

Discounting the very rich or royalty who may have cruised on private yachts, cruising as we know it today is a relatively recent phenomenon. Despite that, some of the great aspects of the old cruise liners have been retained: the opulence of the surroundings especially on the premier and luxury lines, the high levels of service, and the spotlights on food and entertainment. Descending the staircase in the main Atrium of many a ship transports one back to that famous staircase on the Titanic. 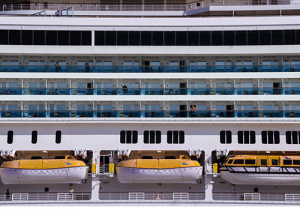 Lifeboats – both in number and equipment – have come far in 100 years.

Time does not stand still though and the pace of improvements and innovations in the cruise industry seems to multiply every year as each cruise line bids for the vacationer’s dollar in an increasingly growing and competitive business. Ships are becoming larger with more and more digital and electronic offerings, more enticing activities such as surfing, skating, and simulated sky diving, and mind boggling public areas akin to theme parks – and those are just the contemporary lines. Luxury lines are adding helicopters and mini subs. One wonders where it will all end in this quest to provide the cruiser with pleasure on vacation.

Having public areas limited to card rooms, libraries, spas, casinos, a pool and grand dining rooms are gone. Internet cafes are the norm, nightlife is no longer bars and dancing. A stroll on deck, or a quiet spot of reading on a deck chair as pictured a century ago is just as likely to be interrupted today by joggers, or by a group of children on their way to the video games room. 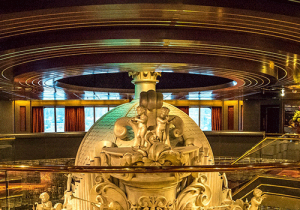 If you are “old school” about your vacation, and want to experience more of what a cruise or a voyage was like in the beginning, but with the added benefits of today’s improved conveniences and safety measures, you still can. Advise your travel professional but be prepared for a recommendation to a higher end cruise line. These lines generally do not cater to today’s latest fads but have a quiet elegance. Here are a few for example. This is not an exhaustive list: Cunard, the Hebridean Island Cruises, Silversea®, Regent Seven Seas Cruises®, Oceania Cruises®, and, on a smaller scale, most river cruise lines.

Curious about cruise ships, past and present? Check out this listing. Images used courtesy of Bigstock and Pixabay.