Skip to content
NCL Steps Up With New Bliss

NCL Steps Up With New Bliss

Having spent three preview cruising nights on the new NCL Bliss, I can personally say that they have a winner with their new billion-dollar ship.  It was evident that sister brands Regent Seven Seas and Oceania have had a major influence on this new ship.

Equaling and sometimes surpassing the mega-ships of Royal Caribbean, Norwegian’s Bliss may be the perfect multi-generational ship in today’s cruise marketplace.  Boomers, Gen Xer’s and Millennials, and their children will find the Bliss as a perfect answer for keeping everybody happy during their cruise.

The major “buzz” about the Bliss came from the onboard go-cart track, the “Laser Tag Hut,” and the over ocean water tube slides, but the ship is much more than these nice features.  Keeping with the NCL “Free-style,” approach, this new ship has everything from an Iron Chef Jeffrey Zakarian, seafood restaurant (Ocean Blue), a 24-hour pub (The Local), a boutique eatery (Food Republic), a country western bar and barbecue joint (The Texas BBQ), and a recreation of Liverpool’s Cavern Club, complete with a great cover band Beatles review.  And, the big theatre live presentation of “Jersey Boys,” which received a standing ovation from a packed theatre (and the lead singer even sounded a lot like Frankie Valli).

We departed and returned to the Bell Street Passenger Terminal in downtown Seattle, and the check-in and departure were smooth and quick—a good sign for the 4002 passengers who sailed on the first 7-day Alaska cruise on June 2nd.

Our balcony stateroom was on deck 14 (the ship does have a deck 13 eschewing the bad luck theory connected with that number).  The balcony stateroom was compact, but well-designed.  The shower in the smallish bathroom was “roomy,” or at least big enough for a large person.  A balcony held two chairs and a small table and had a clear class railing wall.  A queen-sized bed, flat screen TV, a closet, storage compartments, a small refrigerator and a safe completed the room.  The ship uses the European style of room lighting, requiring a room key to be inserted in a slot to operate.

We had the opportunity to see other stateroom types from the single person, “studio’s, up to the large private suites of the “Haven,” and several categories in between.  Do look where your stateroom is located, because it’s a long hike from either a far forward or far sternward stateroom to the elevator and stairs.  But, all-in-all NCL has done an excellent job in providing great choices for all levels of cruisers.

Many of the public rooms are located on decks 5, 6 and 7.  The buffet and a terrific Observation lounge are on decks 15 and 16.  The Observation lounge covers nearly half the ship on the outsides and the stern and it looks like it came directly from either Oceania or Regents latest ships in both style and comfort.  This lounge will be excellent in Alaska because it affords such great views through its ceiling to floor windows, and many daybeds, couches and comfy chairs.

I have eaten at many NCL buffets in the past, but the Bliss’ buffet is by far the best in the NCL fleet—again another cross-over from Oceania/Regent.  In fact, at lunch time there was a seafood buffet which looked like the ship had purchased all the crabs, shrimp and the like from Seattle’s Pike Place Market—it was an impressive display!  We mostly had breakfast in the buffet (except for a single piece of late afternoon pizza).  Several stations included a wide range of options from crepes, to waffles to eggs and salmon benedict to omelets.  Ethnic choices from India and Asia were also available.  The seating area is very large and has both bar-top, booth and table seating, with lots of room for eaters.

While discussing eating (a critical part of a cruise vacation), the no-charge dining venue, the Manhattan Dining Room and Taste and Savor dining rooms were excellent.  Both the quality of choice and the service was superior.

The Bliss’ crew makes great use of modern technology in the food arena for ordering, seating and support for the service staff and their managers.  And in the areas around the elevators there are touch screens for making show, restaurant, shore excursions etc.  A nice feature is that it shows how crowded (or not) restaurants may be, to help make planning easier.

To mention a few of the other dining options, the 24-hour pub called the Local was a nice touch with comfort food and pub snacks.  Other dining included an Italian Tuscan Grill; a Japanese Teppanyaki Grill; a Jimmy Buffett’s Margaritaville; a Steak house; a pool area grill; and the other options previously mentioned.  There’s also a Starbuck’s, a cupcake and gelato store, a wine tasting bar in collaboration with the Mondavi family, a whiskey tasting bar, a sports bar, the A-List bar, and several more.  There’s even a premium Napa Valley wine by the glass dispenser in the buffet area.

As far as entertainment is concerned, there’s something for nearly everybody.  There’s a country western bar in the BBQ with a band; there’s atrium entertainment; there’s piano music and sometimes with comedy, and more.  Then there’s the main theatre which does live shows including Jersey Boys and a new show call Havana.

Of course, there’s a casino (smokeless), and a wide variety of duty free shops with jewelry, clothing and all of the traditional shop products.

The top level of the ship features the two-deck cart racing track, the laser-tag hut; the adult waterslides, a large pool and a nice children’s water park area.  The video screen appeared to be the largest I’ve ever seen on a ship and it had both high-def and 4k clarity.  Also up top is the large and classy Mandara Spa area with all of the traditional spa treatments, and some new touches.

What were the downsides to the Bliss?  The only slightest criticism came from only having two banks of elevators instead of three.  That made for some long hikes to the elevator banks, and the hall ways are compact, so when the room stewards have their carts in the hall, it’s one-way traffic only.  Neither of these criticisms are more than a minor annoyance.

In conclusion, let me say that the Bliss passed its inspection with flying colors.  This ship was a quantum leap upward for Norwegian.  We were told by NCL management that chefs from all three lines (Norwegian, Oceania and Regent Seven Seas) were called to Miami to collaborate on improving menus, and I think it can be said, they were successful.

This ship is ideal for multi-generational travel.  There is literally something for everybody all of the time.  It’s our opinion that the Bliss will bring higher revenues than any other ship in the NCL fleet. 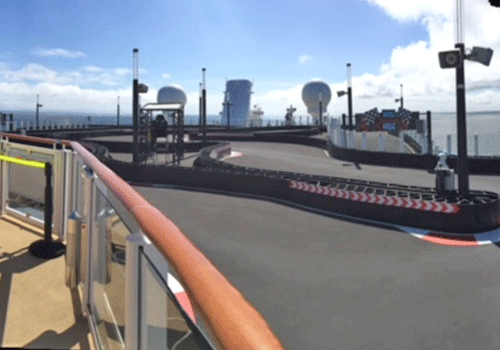 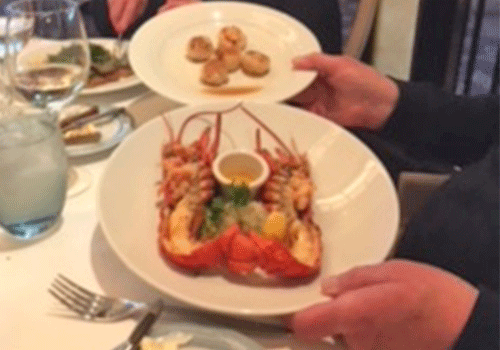 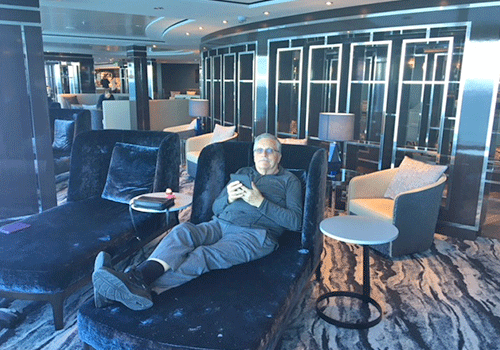 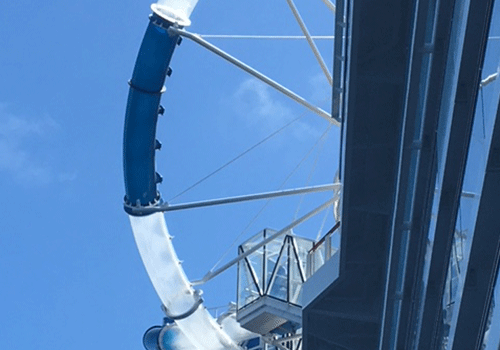 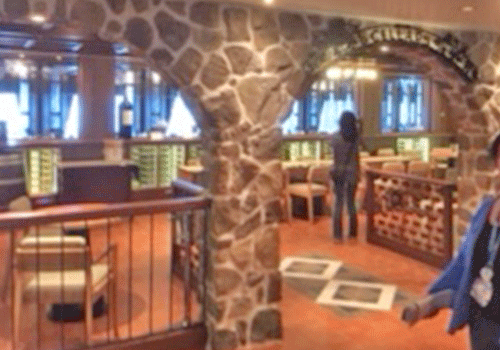 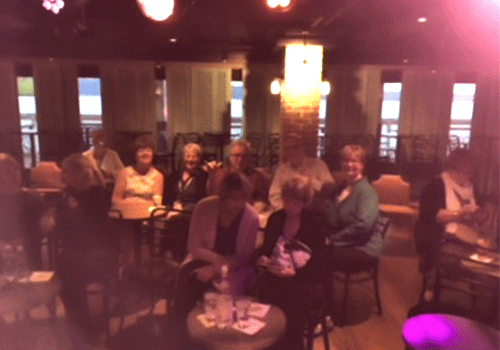 The Cavern Club, with Beatles’ review 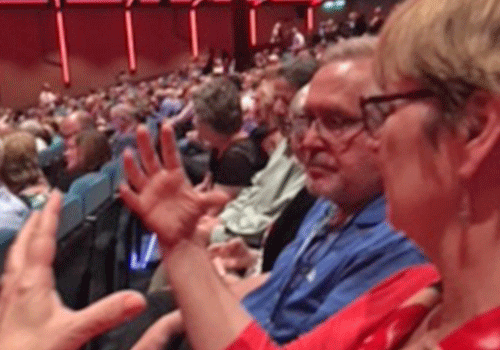 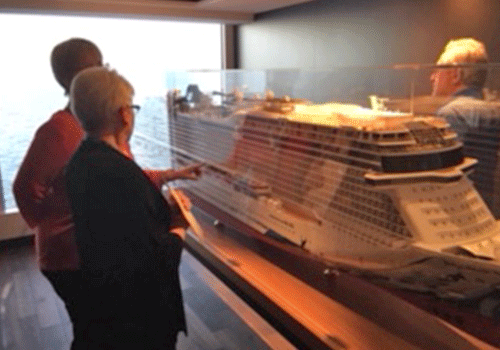 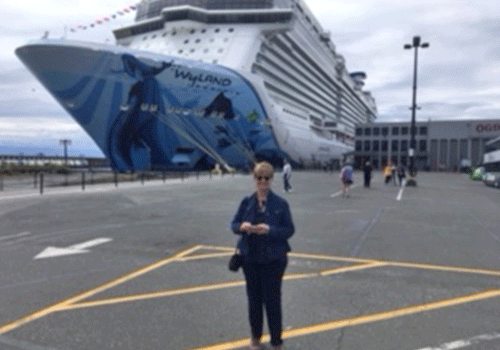 Author Rich Skinner is co-owner of Cruise Holidays of Woodinville in Washington State . Images courtesy of  the author.